Nephew or not, the content of some of the published wiretapped conversations, payment of money and getting receipt for it, insisting on not talking on “unsecured phone”  and alike makes this case one to follow.

Two things will tell the whole story: the evidence, and those who foot his legal bill. The rest is purely your/our iroonie-baazie, and a gross waste of time.

I read through the FBI’s Criminal Complaint and it looks fairly solid. Your nephew left the US when he was 2 and came back when he was 37 to engage in these purported activities, with 2 short trips in between. How are you so certain that you know him so well?

Also, for someone who has lived in Iran all his life, taking pictures of MEK members in the US or taking them to Iran may not seem like a big deal. But these cult members are US citizens and are protected by US laws.

If Soosan Ghahramani Ghajar is indeed JJ's nephew's mother, then Ahmadreza must have had ample time to be indoctirnated with pro-IRI regime, anti-American and anti-Israeli idiologies and groomed and prepared to come to the US to carry out clandestine operations through subterfuge and chicanery! I mean spies are not Martians with horns and tails ! جاسوس که شاخ و دوم که نداره!

Ok. Now it's time for you to come clean JJ. Is your nephew the one who blogged as "Niloufar Parsi," aka Irandokht, aka Jaleho, aka Soosan Khanoom, etc., etc., on Iranian.com?

He translated Ebn-e Sina, so he couldn't possibly be guilty.

Is he the brother of this professorial scumbag:

He is the son of

On a more serious note, I think JJ suffers from the same disease that many West residing IR apologist suffer from. For a lot of the diaspora Iranians, the only contact and interaction that they have / ever had with the IR is their annual summer family trips to Iran--what I call the "chelo kabab" trips. During their chelo kabab trips, the only side of the IR they see is the happy one, i.e., family get togethers, weddings, etc. At the airport they're greeted kindly, the cab driver is nice, restaurants are great, etc. They don't / have never experienced the brutal (the real) side of the IR like some of us have. So, they just can't believe that the IR is the same terrorist / murdering gang that they read about in the Western media.

Now I know that JJ hasn't been to Iran for a while, but he is suffering from a variation of the same disease, and that is that the only side of his nephew that he has naturally seen is the kind one. He can't imagine his niece to be a spy. I really can't say I blame him. I would probably react the same way, but that does not take away the fact that the government's case against him is extremely strong. We shall see...

I just finished reading Tony Judt's book "Postwar", which is a great overview of European history from 1945-2005. In it, he mentions that after the collapse of East Germany it was brought to light that 23 members of the democratic West German parliament were on the payroll of the East German intelligence services. I've often wondered what would be discovered in the files of the IRI's intelligence and foreign affairs ministries if and when the stinky IRI falls someday....

Dear Amir - I am sure that 90% (at least) of the "iran analysts" on Western TV stations are IR spies. Old commie revolutionaries, turned "college professors" who will protect their glorious revolution at any costs.

Dear AO, I generally don't watch what people do with their mouths (talk is cheap, and Iranians are among the cheapest people around); I watch what they do with their feet. One has to marvel that some of the most die hard supporters of the IRI love living in the West as much as they do....

JJ, This is the third case that I recall. You had another relative in some dilemma  a few years back. Many in your family (I believe Behnood, another west rsiding islamist in closet, is also a relative), seem to serve the slimic regime in some capacity. Hired, like AMD or free like yourself. And like Behnood, Parsi, NIAC and now AMD you are always there to defend. AO disected some of the reasons.

This guy is apparently the nicest member of your family and we are suppose to overlook any evidence on that basis.

JJ- I'm not a lawyer, but if I were you, I would advise your nephew to start singing like a canary--you know, kind of like Michael Cohen. I think that's the best way for him to avoid spending the rest of his life at a federal ranch. One way you can help him is to perhaps supply him with the info and data on the U.S. residing IR agenst who had infested your previously owned site (and perhaps even this one) so that he can share them with the feds. One of those agents on your previous site was even called iranmilitaryforum.net for God's sake. Also, I'm sure you know a lot about CASMII folks. Maybe you can give him that info as awell, and also the NIAC lobby. That maybe your nephew's only way out.

PS- You may want to hire him a good defense lawyer--preferably a Jewish one. :-)

Maybe, he can hire Michael Cohen....

May I propose that the accused's legal defense in court be that he belongs to the moderate-reformist-liberal-pragmatic-softliner-cute and cuddly camp of the IRI....If we don't acquit these softliner culprits, then that will only empower the hardliners to start scouting out the Jooooz on campus....Or something like that....

Here is a picture of Majid Ghorbani who worked at Darya Restaurant in Costa Mesa (Orange County). He seems like a nice waiter!

That New Years Eve Party hat is a liberal-reformist-moderate-softliner version of the hardliners’ ammameh and the Rahbar’s haute couture kaffiyah....I ask you: is this the face of a guilty man?

Investigating magistrate So-and-so: “Are you able to account for your whereabouts on the night of such-and-such?”

”Victim(s) of circumstances”: “I was in my apartment translating Avicenna’s “Canon of Medicine”. My cat, Ruhollah-yeh Botshekan, can vouch for me.”

I read here back in March that Niac offices were raided by FBI with lots of computers and hard drives taken away. I wonder if the arrest of these two men were as the result of information obtained during the raid.

The thriple-khoresh (Gheymeh/Ghormehsabzi/Bademjoon) tahdig appeteizer @ Darya in Costa Mesa branch is 2nd to none! Their in-house made doogh is all you need to accompany that with! 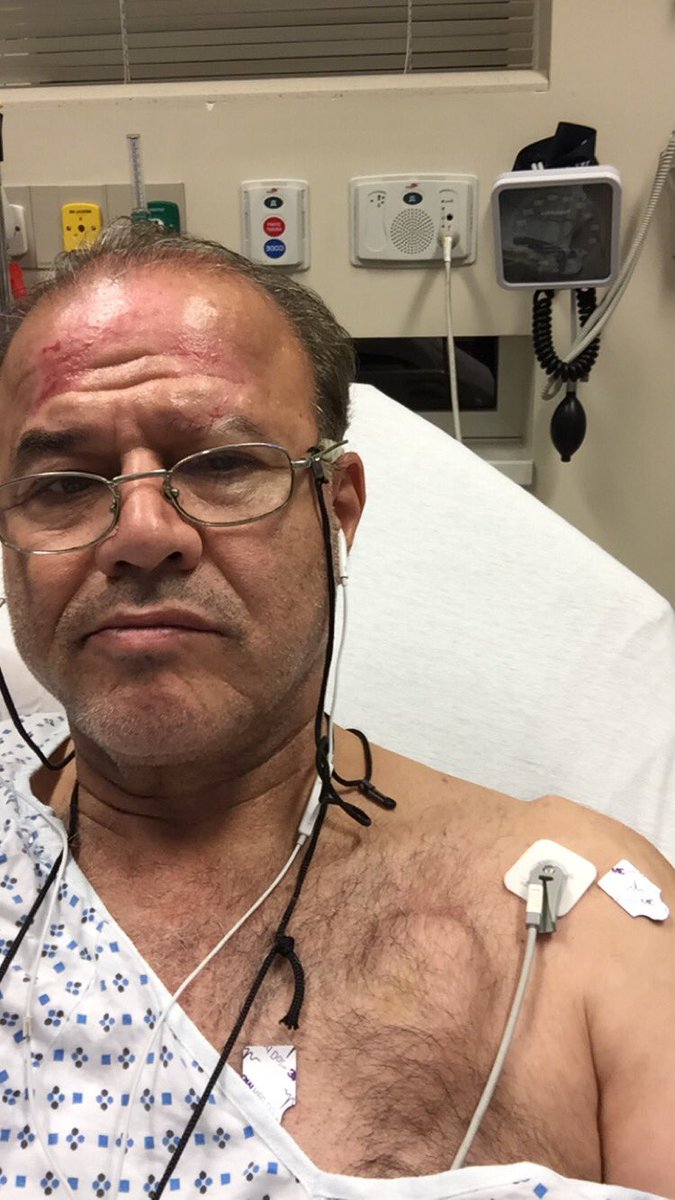 From the picture it looks more like victim of over eating than anything else. when you talk with him can you ask him what exctly he found in chabad Jewsih center in University of Chicago beside worn out yamak's and some jews with long beard?  Fascinating indeed.

The Art of Madness

Darius_Kadivar | 52 minutes ago 2 2
Category: None