Great news!  Congrats!  and thanks for posting.

Good to hear from you and thank you very much for your note.

This is the same book. I chose a different title because another poet, living in Vancouver, has a book called Aline.

The City As Anthology: Eroticism and Urbanity in Early Modern Isfahan

Viroon | less than a minute ago 0 1
Category: None 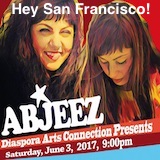 Lately, the crazier the idea, the more inclined I am to gurgle it around my brain. The alternative is no good. Much easier to believe in an alien lizard race, for horrors, than a neighbour shopping carefully for food. —Jam Hamidi