This is my question: If the president was to be elected solely on the basis of the popular vote, who would have been the most likely winner?

So far, Clilnton has apparently the most number of votes...

so now  if you want to have a sound economey, law and order, and cut wastefull spending you are neo-fascists, and anti-spending economic hooligan according to the usefull liberal idiots!

What does a sound economy have to do with insulting ethnicities, religions, etc.?  Trump and his followers ARE neo-fascists and hooligans, as long as they resort the 1930s Nazi style propagnda.  And the republican mass will kiss his butt, since they arealdy screwed up with the rest of their idiot candidates.

I have only one thing to say - BS is BS!

"...the main question remains as how to thwart an unimpeded bulldozing maniac toward nuclear codes. "

Ain't that the truth?

I can see the folks who don’t like the Clintons vote for Trump. I can also see the uneducated blue collar folks who have lost their jobs in the past 20 years fall for Trump’s promises, like the dummies that got coned and paid thousands of dollars for Trump University. I can also see the hardcore commies and Tudeh-eis who want the US and capitalism defeated so they can have a second chance at international socialism, vote for Trump to take the US to the edge of bankruptcy as Bush/Cheney did.

What I don’t get is the folks who have gone to college and supposedly have gained some knowledge, believe that Trump can bring back the factory jobs from China, deport 12 million Mexicans or bar people from Muslim countries to enter the US.

The other amusing part is the Iranian-Americans who believe that Trump will use the US military to topple the Regime.

There is a sucker born every minute!

Faramarz, there's another faction; the supposedly educated crowd who will vote for Donald Duck, let alone Trump, to avoid a democrat being elected. These folks look at it the "lesser of two evils" kinda thing. I work with a bunch of them!

Asa for the Eye-ranian crowd, all 3-4 of them....wishful thinking and being delusional is not a crime....

Then who if not Trump....Strap-on Hillary!? Four decades of big dick willy clinton and his gang hasn't been enough! Gaar Aagr Tabib Boodee Kalleh Kachal Khod Moo Mikashti! If you guys were so full of wisdom and know how and experience you would fix that dilapidated IRan of yours! But then again it's a free country and we are all entitled to our opinions but not our facts! Halla ye dah bista shast red bezanid taa hall konid! :-)

Eight years of Bill Clinton was the best economic times in the US; real income growth, low unemployment, no deficit and a large surplus. During his time, there were no wars, only a few days of bombardment in Yugoslavia to stop the Serbian genocide. The Middle East was quiet and he even brought Israel and the Palestinians together for peace talk.

I'll take that over Bush/Cheney or Trump any time.

Nobody bilakh anything, so chill.

Frankly, I do not ever underdstand the mentality of supporting the right wing nutcase party, but that's me and this is a free country and we are all entitled to our opinion.....

Like I tell my con, I say conservative buddies, "man, couldn't the esteemed Republikan party come up with a better candidate?" They blew their chance with McCain by making him nominate that beach Palin - and now this!

Difference of opinion, when made in a constructive way, adds to the debate. In any case, ultimately, in a true democracy, the majority is "supposed" to win.

Bill Clinton was at the right place and at right time! Internet revolution was taking place regardless of who was in the WH. Also, massive massive high tech espionage and questionable tech transfer to China and other places took place on his watch! Under his auspices and his justice department giants such AT&T Bell Labs were disintegrated and demolished (Lucent)......of course the collapse of stock market occurred in late 2000 and 2001 (When Bush came in) but the architect was no other than BC!

BTW, it's not about wisdom.......... and fixing Iran should be up to those who fucked it up, well, their children. I had nothing to do with it! Foriegn intervention is not the answer either - won't work, only opens the door to taking Iran apart and making another Syria out of it. I can't imagine anyone, even you guys, would want that.

Trump is probably the only casino owner/operator that actually lost money running the tables and the associated prostitution, and had to file for bankruptcy so the tax payers would pay for his mistakes. Based on Watson's logic, he was unlucky and at the wrong place at the wrong time.

You know, this is a democracy and people can vote any way they want, but let's not create stories about AT&T, Lucent, Fiorina, HP, the startup environment of the mid-90's, the venture capital, etc. Some of us were actually in the middle of it and can say exactly what happened and why, which is beyond the scope of these comment sections.

Denying the achievements of the BC administration during the 90s is the work of lunatics and liosers like Newt and Kasich, whio always claim: "We balanced the budget."  Excuse me, who is WE?

A common denominator among some Trump's fans is those who have shut the hell up after Bush failed and kept sweeping his mess under the rug. Then they carp at Clinton or Obama.

Being in "the middle of it" Watson, means working on Sand Hill Road in Menlo Park, and not coding C++ in New England!

Where a married man puts his dick is between him and his wife and not a bunch of old, white, religious-freak congressmen.

A common denominator amongst the IRanian folks around here is that they too arrogant for their own good! They don't have a pot to pissed and yet they want to prescribe to the greatest democracy in the history of the world how to conduct their business, politics, culture, etc. ....as I stated earlier, you are entitled to your opinion but not your concocted facts! And, BTW, the size/length of one's maameleh is inversely proportional to one's number of User IDs.......!!!!!!!!!! :-)))))))))))

For the Iranian fans of Trump, it's about a "strong man" figure - then they ask why they have dictators back home. That's why their man for the WH has been praised by some of the most disgraceful figures of our time: Kim Jung, Vladimir, Louise Farakhan, etc.  It's obvious  how pathetically they have been embarassed but quiet about it.

Why is Ayatollah faramarz using The word Dick? Is something happening around here?

Trump has not said a word about the human rights situation in Iran, the Regime's terrorism in the region, etc. All that he has said is that he will re-negotiate the Nuclear Deal because the US doesn't have $150 billions. He has also said that he will negotiate a deal with Putin, with Kim Jung Un, etc.

Where do you guys get your hopes about him invading Iran?

But let say he does, if he does that will you be going to the frontlines as an embedded iroon.com reporter?:))

You proved my point Watson.

The techies were never allowed to sit in the strategic meetings. They are usually locked up in the back room, and in front of a computer. You probably worked for Eslamboli at the Labs. What a piece of work he is.

THanks for hurting my feelings and belittling me. FYI, where I publish. You can find my name, photo, and other info. http://www.comsoc.org/tccn And, by the way, Mr. Faramarz, we hire Indians from Haydarabad and Rajestan to write code in C++!!!!

The fact that Trump is impervious to human rights is a no brainer.  The man lived and grew up in casinos.  He has dealt all his life with low level, heavy drinker gamblers with degraded social values.  He is more prone to sell American values for cheap Mullah's turban...just because those bastards own Iranian people's oil.

I did not mean to belittle you or hurt your feelings. I was just stating how the game was played in the mid. to late 90's.

p.s. The coding in Hyderabad and other places started in the 2000's; another fuck-up by Bush/Cheney admin. to facilitate the outsourcing of jobs offshore. We felt that one here as well.

Some of the worst decisions made that were the cause of the biggest thefts of high tech from US to overseas were made by NONtecies! The so-called MBAs from tokhme schools!!!!!!

You do realize Watson that back in the mid. 90's there was not such a title as a CTO. There were a few CIO's. And you, based on your stated age, could not have been more than a couple of years out of the PhD program at BU. So being a CTO at that time seems to me a little bit of stretch.

But nevertheless, you are a good guy!

BTW. Bragging and boasting degrees won't help Trump's cause.  Most of his base is non-colleged, uneducated white boys, who have done small feel small. http://yhoo.it/25zf7Br

Go on...brag about your MBAs, PHDs, JDs, size of your manly prowesses....meanwhile these two obnees continue to rape and plunder Iran....go on ...hope you enjoy your successful careers in America.... 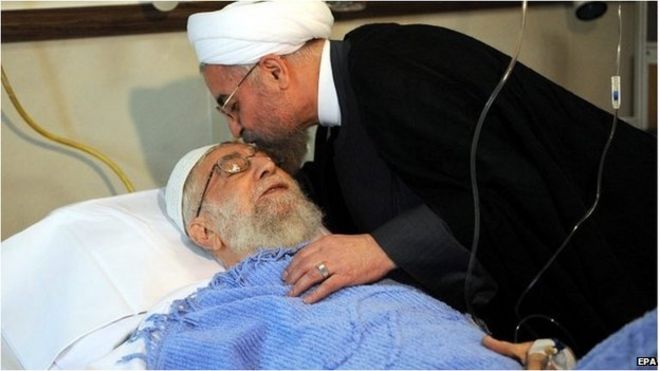 Would mr. faramarz please elaborate on The status of The married man's manhood and it is proper position between him and his wife. I think the whole thing just boils down to that, regardless of your political orientation.

Colonel Sanders and His Chickens

inspector_clouseau_watson | 5 hours ago 0 7
Category: None

PBSNH: From Judy Woodruff: Longtime PBS NewsHour Anchor and Co-Founder Jim Lehrer Has Passed Away at 85

inspector_clouseau_watson | 5 hours ago 0 3
Category: None