“We should allow Iranians to speak for themselves, rather than assume they can be spoken for by self-appointed representatives with questionable motives." M.R.

You sound pretty stupid. I bet you are even stupider than your writing reveals.

One by one, President Trump will grab the IRI regime thugs (i.e., Khamenei, Zarif, Rouhani, et al) by the scruff of their necks and force them to either sign on the dotted line that "ghalat kardam, %oh khordam" or he will splash their brains out all over the place! Even under the former, it would be tantamount to the total collapse of the regime in its entirety!!! 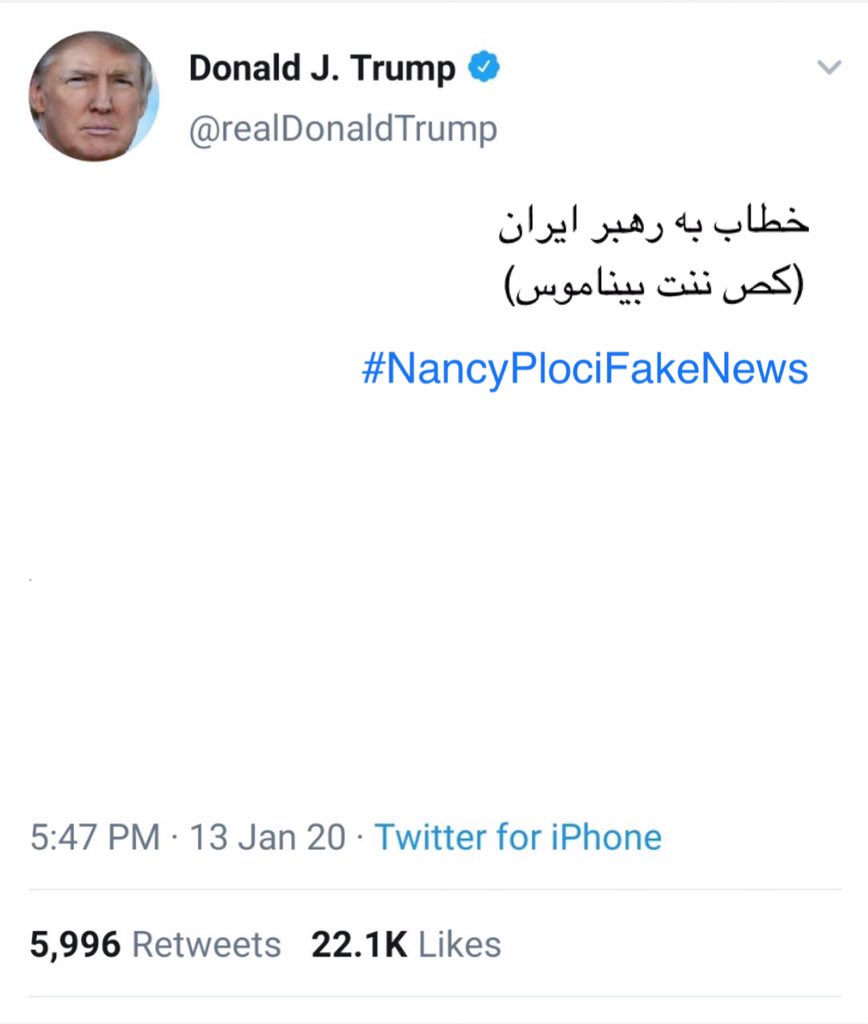 "The long history of violent crackdowns on Iranian protestors by Iran’s leadership must be condemned, but it does not change the fact that Trump’s withdrawal from the Iran nuclear deal (JCPOA) and “Maximum pressure” approach is responsible for the current state of affairs"

Translation: we should just talk about the violence brought on Iranian people by IRI regime for the next one hundred years (After all talk is cheap). Also how dare U.S cut the easy petro dollars? (With all the easy oil money we could keep the regime a float for a long time, have the regime do its thing including sending phony opposition people to U.S and Europe). We really don’t want a real change at the  end of the day we want to maintain status quo.

Cheering Soleimani's exquisite death by a toy driven by a teenager from a non-descript office building in Las Vegas, is not a crime. It is a Delicacy.

Attending Soleimani's funeral as a result of a toy driven by a teenager from a non-descript office building in Las Vegas, is the most accurate proof of insanity. After being asked to hold up your hand and look closely at it.

Soleimani was manufactured as a Rostam-esque (and I should know) Cultural Iranian Superhero by Iran's state propaganda who seeing that literally NO ONE in Iran was buying Islam's "cult of depression and sadness" anymore found it easy to spread fables and myths about the audacious prowess and infamous trickery of the "Unkillable Qasem". They even built him an Instagram account!

Iranians living abroad are protected by LAW. This includes freedom of Speech (Iran doesn't have this), Freedom of Assembly (Iran? Hilarious!), Freedom of travel (Iran? Not really), and the freedom to celebrate the delicious death of essentially Iran's answer to Heinrich Himmler (A Nazi who created the SS).

Blaming Trump and the pest-extermination of Soleimani, or even US sanctions, for Iran's amped up mistreatment of Iranians, is not holding the hostage taker responsible for torturing the hostage.

Iran (Government) is a sick and demented hostage taker.

And it is especially torturing the Iranian people more now.

If it takes a surgical war that the US has shown it can easily conduct, and the US is on board with decapitating the criminal leadership of the Islamic Republic (who have done FAR worse than war to the Iranian People), I and many Iranians comfortably watching from the barcalounger, with a nice Cocoa (with marshmallows) are kind of OK with the idea.

What Does the Iranian Election Tell Us?

FATF blacklists Iran, but does it matter?

Newsweek: Trump says it's time U.S. passes war on ISIS to Russia, Iran, Iraq and Syria, focuses on oil instead

Jahanshah | one hour ago 0 21
Category: None

CNN: Iran was already struggling with one crisis. Now it has the worst coronavirus outbreak in the Middle East