Mr. Parsi jaan, the culture of IRI can be summed up by three principles: mendacity, cronyism, and sycophantism. Case in point, our two Basijis here who are glued to the bayzeh of sar Dabir and who constantly spew nonsense about Israel!!!

Who the fuck gave this asshole a PhD? And which son of a bitch gave him a job?

Is this the culture the PhDer talks about?

Looks like the DOD need to take a serious look into their vetting process and what kind of a madar ghahbeh they hire!! 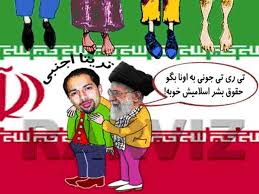 LOL! Absolutely! This must be original, though. They got the idea of flagellation from the Jews and the Christians. In Islam the practice is supposed to be “haram.”

What Does the Iranian Election Tell Us?

FATF blacklists Iran, but does it matter?

Newsweek: Trump says it's time U.S. passes war on ISIS to Russia, Iran, Iraq and Syria, focuses on oil instead